Scoliosis: There is Hope! 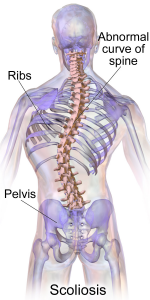 Scoliosis affects about 3% of the population to the degree where it is visible when looking at a person. The percentage of much milder and therefore undiagnosed scoliosis is much higher. About 15% of cases are congenital, i.e. caused by spinal malformations which occur during the first six weeks of embryonic development. The main parts of the spinal bones (vertebral bodies) may not fully develop into square shapes but rather into triangular or wedge-shaped bones. This automatically tilts the bones above or below into scoliotic curves. If the cause of your scoliosis is a congenital malformation, Advanced Biostructural Correction™ unfortunately cannot correct the underlying cause.

The vast majority of scoliosis cases (65%), however, are labelled “idiopathic” by medical doctors. This means the medical profession does not know the underlying cause of the condition. Doctors variously claim genetic or environmental factors as causing scoliosis in adolescents.

The crucial fact about scoliosis

What is really important about scoliosis is this: the spine does not just “bend sideways”. In fact, it twists up in 3D, bending sideways, forwards, and backwards simultaneously in different places. Try this simple test at home to visualise what’s going on: grab a tea towel and start twisting it really tight. Once it gets tight enough, it will develop a “sideways” bend. Can you see how the sideways bend is really made up of a lot of 3D twisting? It’s the same process with the human spine. This is very important to remember, because almost all spinal x-rays of scoliosis patients are taken as either a front or back view, thus documenting ONLY the sideways bend, not any anterior (towards-the-front) or posterior (towards-the-back) displacement of spinal bones. A lateral view of an x-ray would be much more helpful to diagnose what exactly is going on in terms of spinal mechanics.

If you have followed our website or blog for even a short period of time, you know that spinal bones can move out of position in various different directions. Backwards, sideways, tilting, and twisting (rotating) are not a problem because the body has muscles with the correct leverage to correct these misalignments. If bones go out of place forward, the human body cannot correct them by itself because there are no muscles behind the spine which pull in the direction needed. We have previously written blogs about this here, here , and here.

If bones go out of alignment forward, the only thing the body can do is twist up. It will lean back, twist, tilt, and lean forward again many times in different places. This results in many layers of 3D twisting. Depending on how exactly the body reacts, you may develop a humpback, swayback, or a sideways bend – a scoliosis. The underlying mechanical forces are the same.

So, remember, taking a front or back view x-ray of a scoliosis is just about useless for correct biomechanical analysis. It only shows the compensatory sideways changes, not the underlying cause of forward misalignments. Only a lateral (sideways) view can, when measured correctly, detail where the original problem lies.

Most idiopathic scoliosis cases start in early childhood (before age 5) or during the teenage years. These are the two points in time when the spine grows very rapidly, thus undergoing significant changes in a relatively short period of time. Falls, accidents, or bad lifestyle habits during these periods may lead to the spinal misalignments outlined above, which can eventually manifest as scoliosis. We have seen patients who had a “straight” spine, and all they did was go on a long plane ride in an uncomfortable aircraft seat. When they returned after their holiday, their spine suddenly had a small but noticeable sideways bend. After treatment, this had disappeared again. We have also seen patients who used to have “straight” spines, and who suddenly woke up one morning feeling “squint”. Gradually over time, this initial slight crookedness developed into a severe case of scoliosis with extreme pain levels and severe lifestyle limitations. These patients experienced significant relief, postural improvement, and tremendous changes to their quality of life provided by ABC™.

Traditionally, scoliosis is measured on a front or back view x-ray view. The angle is measured between the top-most and bottom-most bones of where the scoliotic curve is. This is known as the Cobb Angle. Depending on the size of this angle, the medical profession recommends observation, bracing, or surgery. Many times however, bracing or surgery comes with long-term complications. If the scoliotic twists are “straightened” out, the torque patterns, twists, and tension often get translated to other areas, where the curve increases and the condition worsens.

Advanced Biostructural Correction™, by contrast, has found a way to correct scoliosis by non-surgical means. It is often a slow process, so don’t expect miracles overnight. However, the unique healing process induced by ABC™ known as Unwinding, can take the spine out of its 3D twists layer by layer. It can restore sideways curves gradually over time.

Our scoliosis patients find that they can move/walk better, breathe better (because their ribs are aligned better and their lungs can do a better job due to not being compressed all the time), and that their joint aches and pains start to go away. Fully correcting a severe case of idiopathic scoliosis can take years however.

An excellent example of a severe scoliosis case is that of King Richard III. His remains were discovered by a team of archaeologists from the University of Leicester under a carpark in Leicester in 2012, and the discovery drew tremendous media attention. Due to the royal status of the deceased, his remains were analysed in minute detail, and a stunning 3D model of his spine was produced. This link gets you to an image of his skeletal remains laid out flat on a table (https://www.le.ac.uk/richardiii/img/science/osteology/bodyc.jpg).

The next link below gets you to the 3D model. It shows just how severely twisted up his spine was, and it illustrates the 3D nature of the twists and the resulting degenerative processes better than any x-ray ever could. It clearly shows how the bones are all facing in different directions. You can see the rough edges on the bones just below the big sideways curve when viewed from the front – this is degeneration. See how the some of the bones, if viewed from the front, are no longer square but have changed shape. This is degeneration too. The discs (in blue) are misshapen and bulging in many places. All of this is due to the spiral twisting of the spine, which creates enormous mechanical torque forces. The body weight gets distributed unevenly, and in places where there is more pressure, degenerative changes occur as the bone remodels itself to account for these torque patterns. Here’s the link where you can see all this for yourself: https://www.le.ac.uk/plone-iframes/spine/

Here is an interesting article which discusses King Richard III’s case in some detail:

King Richard’s scoliosis would have been labelled “idiopathic adolescent onset scoliosis” – meaning that it wasn’t present at birth but started after age 10, and that the underlying cause is unknown. After reading our blog post, you now know what caused his scoliosis. One too many falls in childhood (quite probably some horse riding accidents too), lifestyle issues (including blows suffered while training for battle), and various other events which pushed bones out of place forward.

If you have noticed a scoliosis in your own or your child’s spine, why not take advantage of our free 20mins consultation? Come and speak to one of our practitioners about how we can help you, whether you should see a spinal surgeon, and what the best approach is for your case.

Please agree to the use of cookies. We do not store any personal data in cookies. more information